HyperX®, a division of Kingston Technology, the independent world leader in memory products, announced HyperX Savage, its next-generation SATA Rev. 3 (6Gb/s) SSD. HyperX Savage is powered by the Phison S10 quad-core, eight-channel controller delivering incredible read/write speeds for both compressible and incompressible data, as well as high IOPS. It replaces the highly successful HyperX 3K SSD.
HyperX Savage is the fastest SATA-based SSD in the HyperX family. With sequential speeds of up to 560MB/s read and 530MB/s write, and IOPS of up to 100,000 read and 89,000 write, HyperX Savage offers higher performance, ultra-responsive multitasking and an overall faster system. It features an eye-catching red steel and aluminum case with a low profile to fit most notebooks, desktops and small-form factor PC builds. This new design continues the HyperX trend as a leader in stylish gaming products.
“We are proud to introduce the HyperX Savage as our latest and fastest SATA-based SSD,” said Nathan Su, Flash Memory Sales Director, APAC Region, Kingston. “The HyperX 3K drive has been a core part of our SSD offerings since 2012, and now with Savage, we are unleashing even higher performance and capacities to satisfy the most demanding consumers, enthusiasts and gamers.”
HyperX Savage will soon be available in India with 120GB, 240GB, 480GB and 960GB capacities. It will be sold as a stand-alone SSD or with an upgrade bundle kit that includes a 2.5” USB 3.0 enclosure, 3.5” bracket and mounting screws, SATA data cable, hard drive cloning software5, multi-bit screwdriver and a 7mm to 9.5mm adapter.
HyperX is the high-performance product division of Kingston Technology encompassing high-speed DDR4 and DDR3 memory, SSDs, USB Flash drives, and gaming accessories. Targeted at gamers, overclockers and enthusiasts, HyperX is known throughout the world for quality, performance and innovation. HyperX is committed to eSports as it sponsors over 20 teams globally and is the main sponsor of Intel Extreme Masters. HyperX can be found at many shows including China Joy, PAX, Davao Cyber Expo, and TGS & Big Fest.
Posted by News Room at 2:41 AM No comments:

Elitegroup Computer System (ECS) is holding a launching event at Le Meridian hotel in New Delhi and proud to introduce the latest mini PC – LIVA X, a fan-less design, zero noise and power saving small-size computer. Adopting Intel® Bay-Trail M SOC and 15W ultra-low power design; supporting Windows 8.1, Windows 7, Linux, and Ubuntu operating systems. Moreover, could upgrade to Windows 10 for free once available. Meanwhile, LIVA X supports USB 3.0 port, Wi-Fi & Bluetooth wireless connection technology, and can upgrade storage capacity via mSATA SSD. The most importantly is the size of LIVA X ringing in at only half a liter! LIVA X Mini PC brings a whole new PC experience to the world. Now as, LIVA X is available with sweet spot price as per Indian market expectations.
Sunny Yang, ECS General Manager, said,” We believe that the concept of mini PC is a fast growing trend within the Indian tech-savvy community. Users who are at home, even at office are looking for the most convenient way to enjoy video, music, gaming of course and business PC usage. The end user need which should be designed to provide the best possible video and audio, ensure extremely efficient power consumption, offer sufficient cooling, and maintain low noise levels. People want the truly entertainment and stylish look in small size without compromising on performance for home and office. I can proudly say that only LIVA X can make it happen. Meanwhile, we are delighted that we have been associated with Amazon.in and Flipkart in India. It’s a great movement for us to go deep into Indian market.”
“Intel has always strived to bring the best of computing technology to its consumers, across form-factors. We would like to congratulate ECS on the launch of the Intel® Processor powered Liva X- Mini PC, which achieves the idea balance between great performance, energy efficiency and battery life.” said  Amit Gupta, Director Business Development, Intel South Asia.
“We are very happy to be the partner of choice for ECS and offer our customers the new LIVA X Mini PC. We see this as a great opportunity to offer customers across India – even those residing in the remote areas of the country- the ease, convenience & joy of experiencing this unique product.” said Samir Kumar, Director Category Management, Amazon India.
“We have over 20 million products across 70+ categories. The wide selection of computing products featured at  flipkart.com will now offer a whole new PC experience with the launch of the LIVA X Mini-PC.” said spokesperson from Flipkart.com, India’s leading e-commerce marketplace.
Windows version with 32GB eMMC storage and 2GB DDR3L for MRP of INR 14,900, and that it comes with Windows 8.1, on the other hand, 32GB eMMC storage and 2GB DDR3L without OS for MRP of INR 11,900. The price for the mini PC is never been that competitive in India. LIVA series will be able to give a strategic thrust to the feature rich Mini PC product line with improved technology to a higher level. With ECS creative and reliability we are looking ahead to see these products set the benchmark in India.
No noise thermal design
The LIVA X features a no noise thermal design, providing a real silent Mini-PC. Enjoy it without any noise. Thanks to Intel new Bay Trail-M SOC 22nm processor. LIVA X features ultra-low power consumption, only 1/10 traditional desktop usage.
LIVA fits everywhere
The power of a 64-bit Dual core 2.25 GHz machine with 4GB DDR3, 64 GB eMMC, WiFi, Bluetooth, USB 3.0 and mSATA. And it’s smaller than your mouse! Thanks to the native VESA mount, you can place the LIVA X practically anywhere – behind displays, monitors and TVs. This doesn’t only save space, but it’s also the easiest way to create a “cable-free” environment.
Windows 8.1 inside!
With the anticipation and excitement to have Windows-Based Mini PC, LIVA X is proud to bring you the latest Windows 8.1 with BING OS (optional) to ensure you a pleasant user experience.
Posted by News Room at 2:40 AM No comments:

Samsung Electronics Co. Ltd. today announced two new additions to its Level series of smart Bluetooth™ audio products, Samsung Level On Wireless and Samsung Level Link. Designed for music lovers seeking to pair outstanding audio quality with sleek design, Samsung Level On Wireless headphones incorporate the latest Samsung technology to offer top quality sound in an impeccable package. The Samsung Level Link seamlessly transforms traditional audio products into wireless solutions, using Bluetooth™ technology. Available from late April, both products offer easy controls including a customizable mobile application.
“With the Samsung Level series, we have brought together our industry-leading technology and design expertise to deliver users the best possible audio experience,” said JK Shin, CEO and Head of IT & Mobile Communications Division at Samsung Electronics. “The Samsung Level On Wireless and Level Link are built upon Samsung’s longstanding heritage of mobile innovation to expand our range of audio accessories that deliver organic sound quality, superior comfort, portability and style.”
Level On Wireless
Samsung Level On Wireless headphones feature circular ear pads, producing a sleek, sophisticated look and feel. Equipped with six built-in microphones, the headphones feature an Active Noise Cancellation (ANC) function that accurately maps surrounding sounds for a clearer, uninterrupted audio experience and help sending voice more clearly when people talk via phone. A dual-layered diaphragm system helps suppress excessive vibration, reducing noise and enabling the headphones to reproduce rich, balanced sound across a wide range of frequencies
Level On Wireless supports an easy-to-use touch control pad that allows users to activate and adjust a variety of functions such as S Voice, volume, as well as play, pause or skip tracks – all without touching the controls of the paired device. The headphones are also equipped with a unique Sound Sharing function, so users can seamlessly share their favorite tunes with other Level On Wireless users.
Level Link
Samsung Level Link uses Bluetooth™ connectivity to make a range of traditional audio devices completely wireless. Users simply connect Level Link to earphones, headphones, a set of speakers or a TV, and then pair it to a Bluetooth™-enabled device to enjoy the same high-quality sound they get from traditional audio devices. Providing both Send and Receive modes with a simple switch button, Level Link provides freedom from the hassle of wires. Users can also stream audio to two Bluetooth™-enabled devices at once, so that it’s possible to instantly share tunes with friends. The Level Link’s aptX Low Latency codec provides fast audio conversion for lag-free sound while watching videos.
Posted by News Room at 2:39 AM No comments: 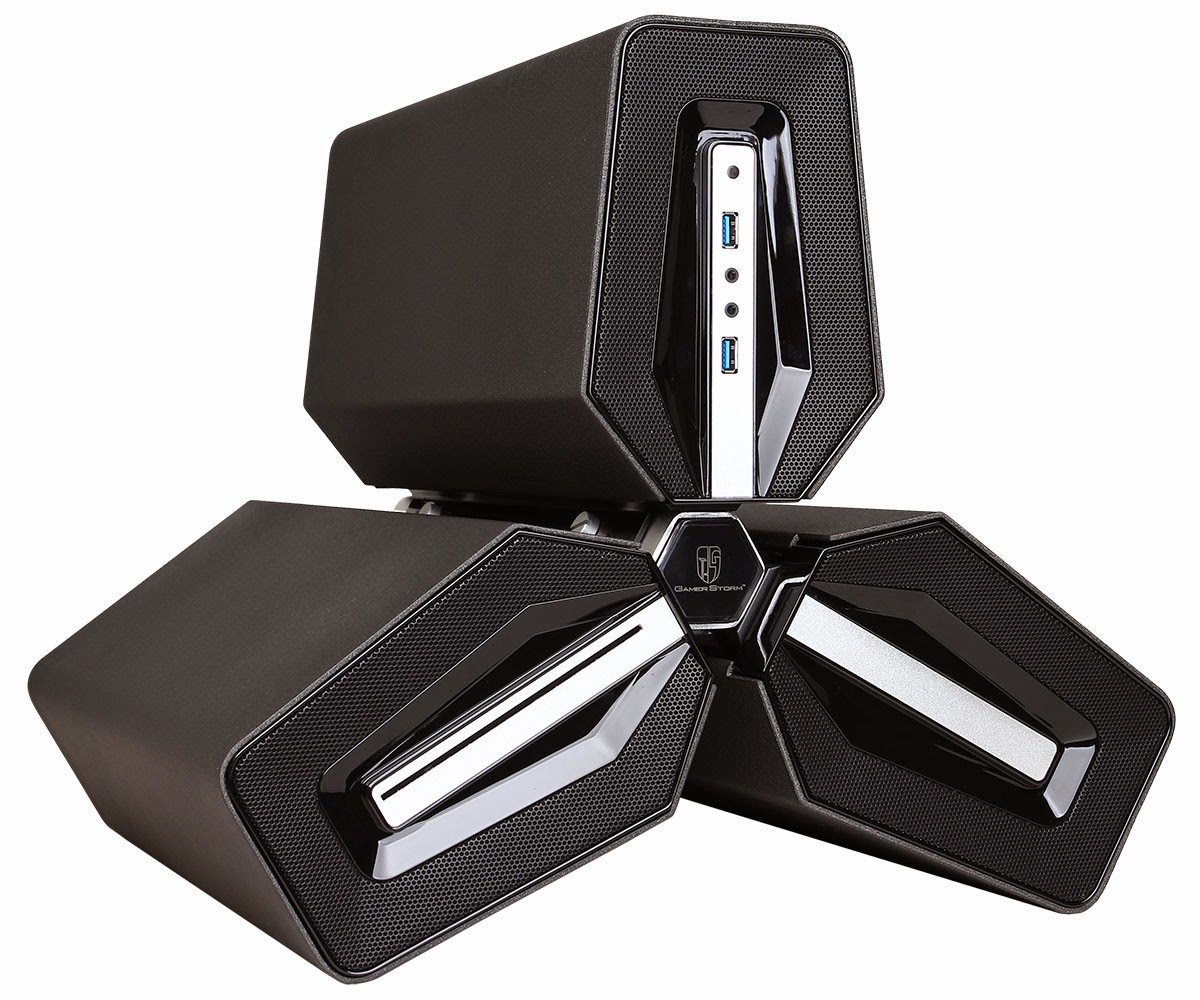 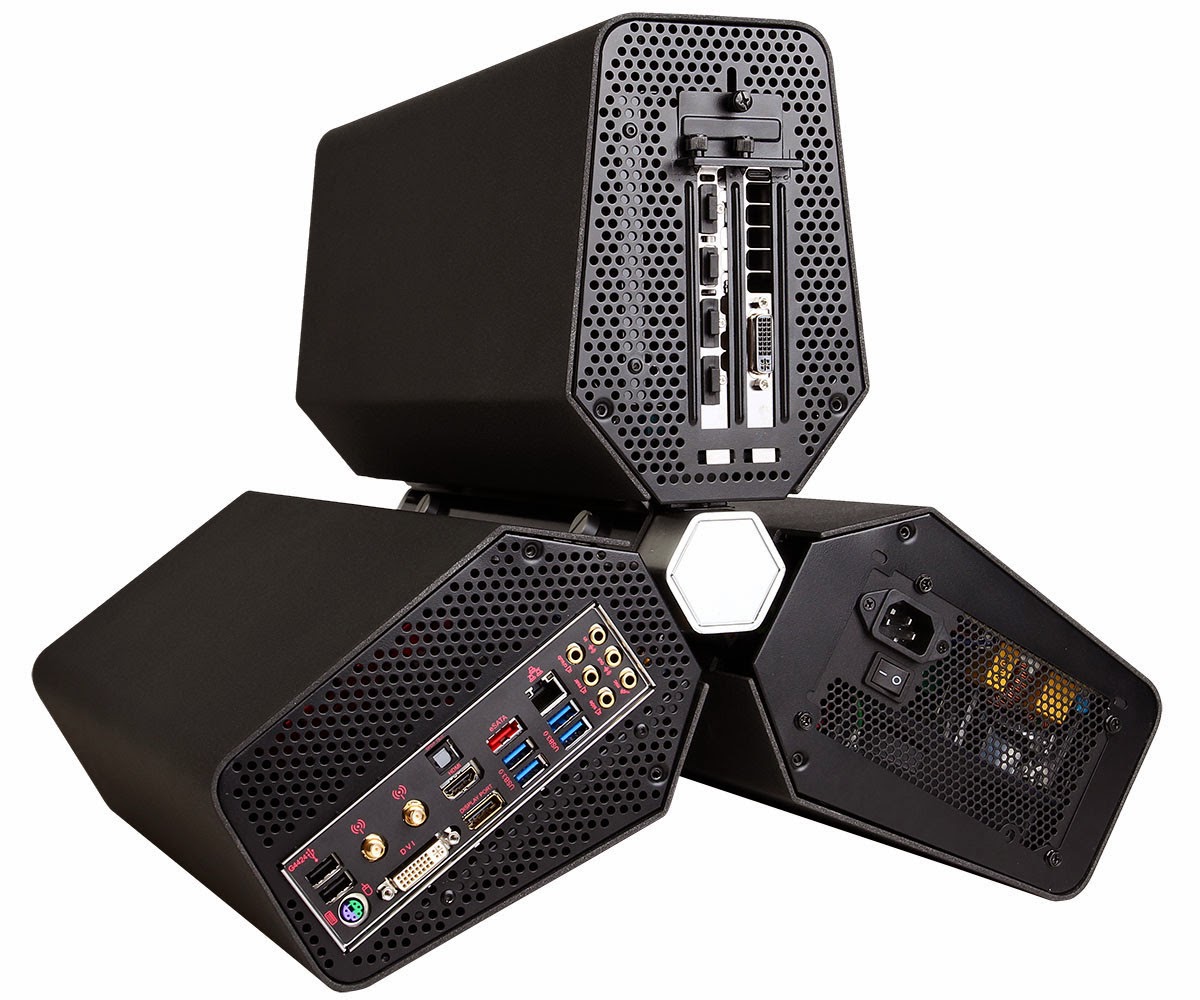 The Trinity will be available in three models: the Trinity 100 with AMD A10-7700K CPU, Trinity 200 with Intel Core i5-4690K CPU, and Trinity Xtreme with Intel Core i7-5820K CPU. All models can be customized and are liquid-cooled by default.
Posted by Tech News at 12:32 AM No comments: Based on an 34-inch IPS 21:9 ultra-wide curved QHD 3440x1440 resolution panel with 178-degree viewing angle, the new Acer XR341CKA is actually the first curved monitor on the market that supports Nvidia G-Sync technology. In addition to being curved, Acer also noted that the new XR341CKA monitor is also perfect for multi-monitor setups thanks to its zero-frame design.
While we still do not have the full specifications, in terms of maximum brightness, contrast or response time, the new Acer XR341CKA monitor also features 100 percent sRGB color gamut, which should appeal to design professionals and photo enthusiasts. It also comes with two 7W integrated speakers with DTS audio, as well as HDMI and DisplayPort inputs and a USB hub.