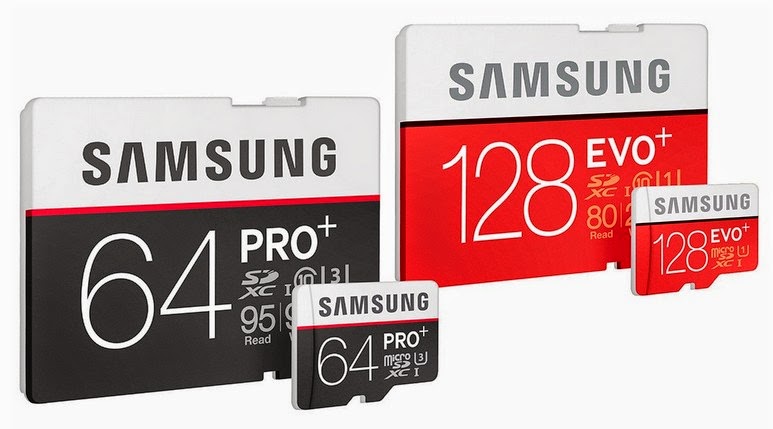 Samsung announced its line memory card lineup consisting of PRO Plus and EVO Plus series. Both PRO Plus and EVO Plus memory cards offer high store space and offer improved speeds compared to the previous offerings from Samsung.The Samsung PRO Plus memory card lineup allows for smooth 4K HD video recording and is thus suitable for use in high-end DSLR cameras, smartphones and digital cameras capable of recording in Ultra HD resolution. It offers maximum read speeds of 95MB/s and maximum write speeds of 90MB/s. It is available in both SD and microSD form factors and comes in 64GB and 32GB storage capacities.

The EVO Plus memory cards aren’t quite as speedy as the PRO Plus cards but still offer very impressive read and write speeds of 80MB/s and 20MB/s respectively. While it may lack in speed, the EVO Plus lineup does offer higher capacity option as the cards come in 32GB, 64GB, and 128GB capacities. It too will be offered in SD and microSD form factors as the PRO Plus line.

Samsung’s new memory card lineup is waterproof, temperature proof, X-ray proof, magnetic proof, and shock proof. So durability is definitely not going to be a concern with these. Samsung claims the new cards can easily withstand being submerged in seawater for up to 72 hours.