Stuffcool, an Indian company that’s made its name selling gadget accessories over the years have launched the most versatile power bank with Type-C Output. The Power Bank offers two full-sized Quick Charge 3.0 Type-A USB ports, one Type-C port (with fast charging and 18W USB-PD) that can be used for both input and output, and one Micro-USB port, which can only be used for charging the power bank itself. 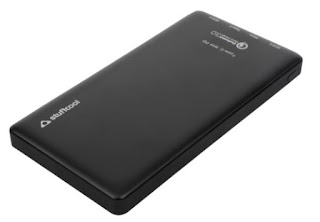 The Stuffcool 720PD is the fastest power bank in terms of both charging smartphones as well as getting charged itself. The Stuffcool power bank is unsurprisingly the lightest and most compact and its build quality and overall feel are really premium. There are four LEDs that light up in white to indicate the current charge level of the power bank and also if it’s charging/ discharging. Another LED lights up in blue when Quick Charging is being used to charge a device or the power bank itself, or if you are in USB Power Delivery mode.The Stuffcool power bank also supports USB Power Delivery, which makes it your best bet if you want to use your power bank to top brand new iPads from Apple. USB Power delivery is a fast charging technology supported by latest iOS/ Apple and Android/ Google devices that delivers much higher level of power than normal 5-10W charger. USB-PD can charge your device up to 70% faster than normal 5W charger. The power bank also protects your devices from over charge.
Posted by News Room at 11:39 PM